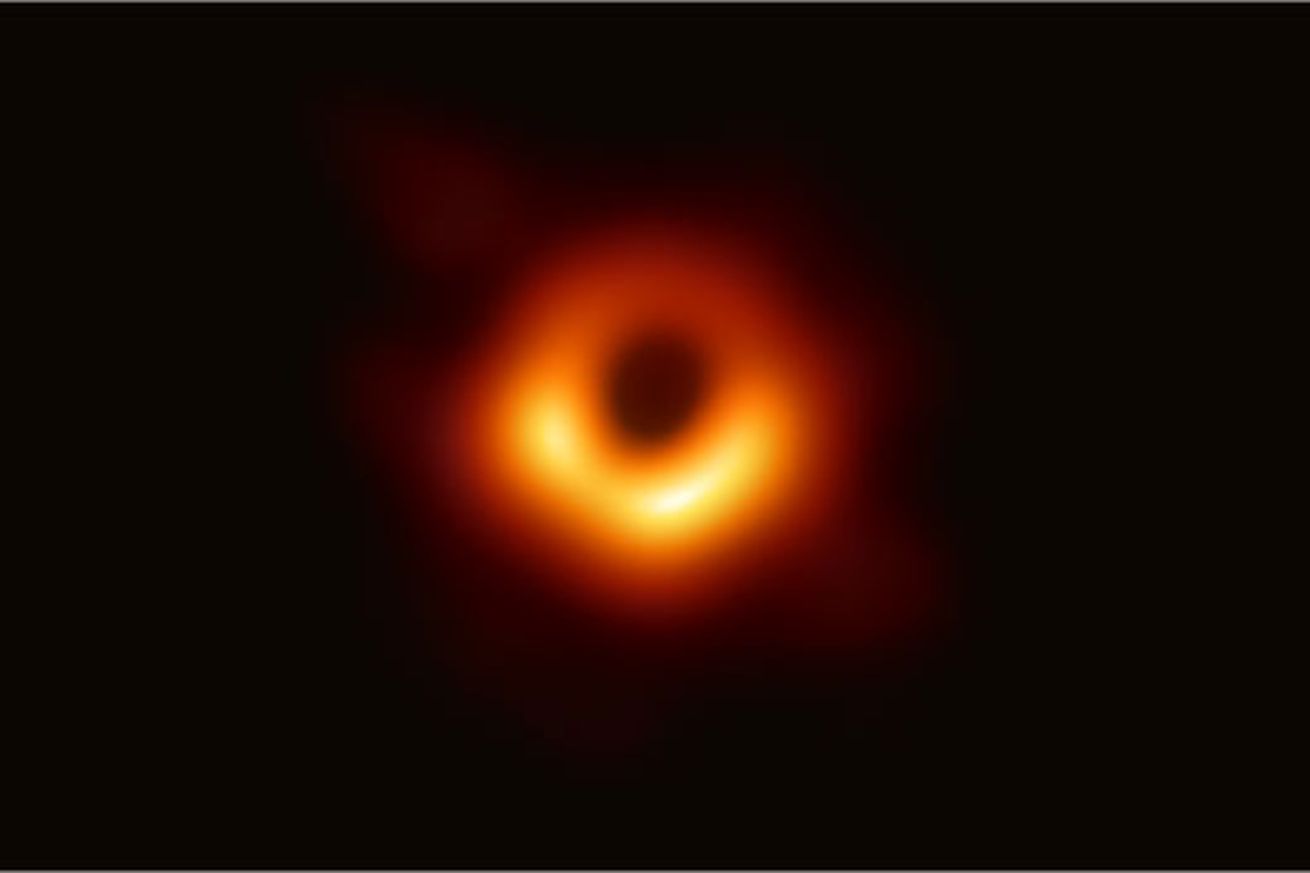 It’s so easy to be excited about Katie Bouman. She’s the 29-year-old computer scientist whose utter glee at seeing a black hole for the first time was captured in a picture that warmed hearts around the world.

Here’s the moment when the first black hole image was processed, from the eyes of researcher Katie Bouman. #EHTBlackHole #BlackHoleDay #BlackHole (v/@dfbarajas) pic.twitter.com/n0ZnIoeG1d

Bouman, soon to be an Associate Professor at Caltech, led one of the four teams tasked with turning data on half a ton of hard drives into the picture that ricocheted around the world on Wednesday.

Even with a picture right there on our screens, actually understanding something larger than our solar system and 6.5 billion times more massive than our Sun was still nearly impossible. But joy is easy for humans to understand — and so that perfectly timed picture of her with her hands over her mouth drew us in.

joy is easy for humans to understand

A Twitter account associated with her alma mater, MIT, was one of the first to congratulate her for the work, saying: “3 years ago MIT grad student Katie Bouman led the creation of a new algorithm to produce the first-ever image of a black hole. Today, that image was released.” The account linked to a 2016 story about Bouman developing an algorithm for the project. But if you were reading Twitter quickly, basking in the glow of a thousand eyes of Sauron, you might have inferred — as many did — that MIT was saying her algorithm alone led to the creation of that image. (They’ve since posted more tweets emphasizing that Bouman and her work were part of a collaboration.)

People took notice. Journalist Flora Graham compared a picture of Bouman with some of the hard drives used on the project to an image of Margaret Hamilton, a computer scientist whose code was crucial to the Apollo missions. Congratulations poured in, and Bouman’s popularity accelerated. For some people, it was easier to relate to one delighted human face than two hundred smaller smiling faces and names.

The people behind the black hole image. Here are (almost) all the heroes of the @ehtelescope. (From our last collaboration meeting in Nijmegen, Nov. 2018.) #EHTblackhole pic.twitter.com/ixegKTo5Lb

Within a few hours, the gravitational well of darkness that is the internet began to tug on her. Her phone started getting so many messages that she had to shut it off, according to The New York Times. Someone repeatedly set up fake Twitter accounts in her name. The next day, the Times published an article called “How Katie Bouman Accidentally Became the Face of the Black Hole Project”. The Verge reached out to Bouman for comment, but a representative of MIT told The Verge that Bouman was not speaking to the press at the moment.

It’s wonderful to be recognized for your work. But it must also be uncomfortable to stand in a spotlight and be asked to take a final bow for your starring role when you were part of an ensemble cast.

“I am so lucky to have had the opportunity to work with you all.”

In response to the attention, Bouman wrote in a Facebook post: “No one algorithm or person made this image, it required the amazing talent of a team of scientists from around the globe and years of hard work to develop the instrument, data processing, imaging methods, and analysis techniques that were necessary to pull off this seemingly impossible feat. It has been truly an honor, and I am so lucky to have had the opportunity to work with you all.”

It’s the internet; things got worse. In what can only be described as a sexist scavenger hunt, people began going over her work to see how much she’d really contributed to the project that skyrocketed her to unasked-for fame. The trolls focused in on one of her colleagues, Andrew Chael, who was listed on GitHub as the primary developer for one of the algorithms that revealed the black hole, and started circulating his picture instead. Chael was having none of it.

(1/7) So apparently some (I hope very few) people online are using the fact that I am the primary developer of the eht-imaging software library (https://t.co/n7djw1r9hY) to launch awful and sexist attacks on my colleague and friend Katie Bouman. Stop.

“It was clearly started by people who were upset that a woman had become the face of this story and decided, ‘I’m going to find someone who reflects my narrative instead,’” Chael told The Washington Post.

In addition to Twitter, trolls have been putting videos on YouTube spreading rumors about her work, and creating fake accounts on Instagram targeting Bouman and Chael. As Ben Collins noted at NBC, “the situation highlighted the vitriol that women continue to face on the internet, and the continued vulnerability of major internet platforms to trolling campaigns.”

I searched YouTube for "Katie Bouman" and not only is *that* video the first result, the 10th result was "Jordan Peterson debate on the gender pay gap, campus protests and postmodernism" pic.twitter.com/1Ii95OVebj

This isn’t just an online trend. Women in science are cited less than their male colleagues. They have a harder time getting work published in notable journals, including the flagships Science and Nature. They are likely paid less than their peers (a 2013 study found that women working in physics and astronomy were paid 40 percent less than men). And they are more likely to face workplace harassment.

The internet doesn’t exist in a vacuum; part of the reason that some posters found Bouman immediately suspicious had to do with her gender. Famously, a number of prominent men like disgraced former CERN physicist Alessandro Strumia have argued that women aren’t being discriminated against in science — they simply don’t like it, or don’t have the aptitude for it. That argument fortifies a notion that women don’t belong in science, or can’t really be doing the work. So women like Bouman must be fakes, this warped line of thinking goes.

Not only are there a bunch of fake Katie Bouman @instagram accounts now, but they’re spreading the lie about her colleague writing most of the code and commenters are just eating it up anyway thinking they’re replying to the real deal. They even made a fake account for the guy. pic.twitter.com/Uqo2GhKOhc

This particular problem won’t vanish after this news cycle passes, though there are some glimmers of positive changes within the scientific community. Researchers are protesting grant processes that overwhelmingly fund male-led projects, and scientific societies are reforming their sexual harassment policies.

But part of the problem is how Bouman came to be a synecdoche for the work of a huge team. Science is being done on bigger scales now, which is allowing us to begin answering questions our ancestors would never have dreamed of. Those answers are thanks to the combined efforts of inspiring people like Katie Bouman, Andrew Chael, Shep Doeleman, Kazu Akiyama, and their other 200 or so colleagues. It’s hard to hold 215 people’s names and faces in your head. It’s easy to remember one delighted face in a photo.

It’s wonderful that we got to hear Bouman’s story. It’s awful that people would attack Bouman’s credibility because her story was told. And it’s also true that she alone doesn’t carry the entire weight of this amazing scientific work on her shoulders alone.

The internet can be dark; it can be heavy; it might be full of garbage.

Saying that she was part of a larger team doesn’t diminish her work, or minimize her involvement in what is already a history-making project. Highlighting the achievements of a brilliant, enthusiastic scientist does not diminish the contributions of the other 214 people who worked on the project, either. But what it is doing is showing a different model for a scientist than the one most of us grew up with. That might mean a lot to some kids — maybe kids who look like her — making them excited about studying the wonders of the Universe.

The internet can be dark; it can be heavy; it might be full of garbage. But only black holes can make light vanish. Bouman has a strong start on her career — we’ll be lucky to see what she does next.