We’re not trying to be rude here but… there’s an ice giant stripping down, emitting gas as it orbits a hot white dwarf

We’re not trying to be rude here but… there’s an ice giant stripping down, emitting gas as it orbits a hot white dwarf

Sighting suggests future of our own Solar System 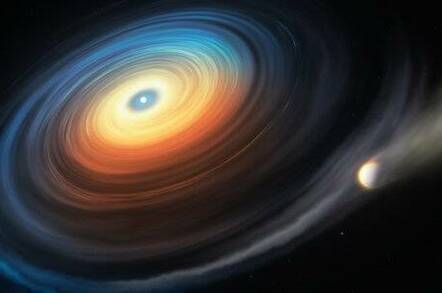 A giant planet orbiting a hot white dwarf star has been discovered for the first time. This sighting is significant because it is first evidence of a world surviving its star’s transformation into a white dwarf.

Here’s how it was spotted: when a team of academics, led by Professor Boris Gänsicke at the University of Warwick in the UK, observed roughly 7,000 white dwarf stars mapped out by the Sloan Digital Sky Survey, they found one that stuck out like a sore thumb – WDJ0914+1914. This white dwarf lies about 1,500 light years away from Earth, in the constellation of Cancer.

WDJ0914+1914 appeared to contain levels of chemical elements that have never been seen in white dwarf stars before. Immediately, the researchers guessed that the star was, in fact, hosting a companion object, or what was left of one.

“We knew that there had to be something exceptional going on in this system, and speculated that it may be related to some type of planetary remnant,” said Gänsicke, first author of a paper published in Nature describing the study.

The X-shooter instrument, a spectrograph on the European Southern Observatory’s Very Large Telescope, revealed that the mystery orbiting object was made out of hydrogen, oxygen, and sulfur.

“We then realised that we have similar compositions in the solar system: the deeper layers of Neptune and Uranus contain large amounts of water and hydrogen sulfide ice – exactly the elements we detected,” Gänsicke told The Register today.

Wondering where the strontium in your old CRT monitor came from? Two colliding neutron stars show us

The elements seemed to emanate from the white dwarf because they’re pressed into a disc of gas spinning around the star. However, the material is actually coming from an ice giant in close orbit.

The star’s extreme ultraviolet radiation is stripping away these gas particles from the planet’s atmosphere, leading to an accretion disc that then gathers around the white dwarf. In other words, this small, rather hot star is slowly destroying its planet bit by bit. Eventually, there will be nothing left except the tiny core of the white dwarf slowly dimming away.

The Solar System will probably end its life in a similar way, Gänsicke explained. The Sun will burn all its hydrogen reserves in about 4.5 billion years. After that, it’ll swell into a red giant, and swallow Mercury, Venus, and probably Earth, too.

As it continues shedding mass, the Sun will contract into a white dwarf. Mars, Jupiter, Saturn, Uranus, and Neptune should all survive, though will migrate outwards into wider orbits around our dying star. These worlds may well have their atmospheres stripped away, just like the ice giant around WDJ0914+1914, if they are pulled inward and move too close to the Sun.

It’ll be another billion years after the red giant stage until everything is over. And then, the only thing remaining will be the Sun as a white dwarf star. ®

Sponsored: From CDO to CEO