There’s a black hole lurking within 1,000 light years of Earth – and you can see stars circling it with the naked eye

There’s a black hole lurking within 1,000 light years of Earth – and you can see stars circling it with the naked eye 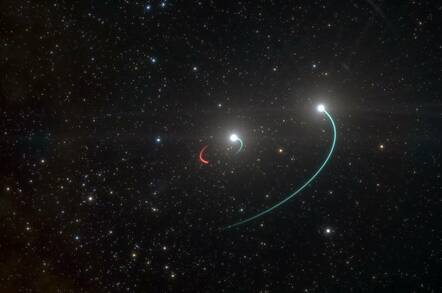 Artist’s impression of the HR 6819 system. The two blue curves trace the motion of the two stars and the red curve is the black hole. Image Credit: ESO

Astronomers have stumbled across the nearest black hole to us yet. The void lies at the heart of a stellar system just 1,000 light years away, and indications to its location are visible to the naked eye.

A team of researchers were observing HR 6819 with the European Southern Observatory’s (ESO) 2.2m MPG/ESO telescope in Chile as part of a wider survey studying binary star systems, before they stumbled across a third object. Spectrographic data revealed that one of the stars orbited an invisible companion every 40 days. Meanwhile, the second star sits much further away from the first.

They now believe that HR 6819 is not a double system, but a triple system – one that contains two stars that are both around six solar masses, and a third object that is at least 4.2 solar masses. That number is much too high for the object to be a neutron star.

Somewhere, way out there, two black holes, one large and one small, merged. And here on Earth, we detected the gravitational wave blast

“An invisible object with a mass at least four times that of the Sun can only be a black hole,” said Thomas Rivinius, first author of the study published [PDF] in Astronomy & Astrophysics, and an astronomer at the ESO.

“It’s best visible in July, and it starts rising in the morning around this time of the year, and vanishes in the evening behind the sun around October. Right now, it’s above the horizon in the morning. It’s a bit on the faint side, and it’s brightness would be drowned out by city lights. It’s also not that far away from the bulge in the Milky Way, but to really find and identify it among its neighbours you need a chart,” Rivinius told The Register.

If the researchers are, indeed, correct, the object will be the closest black hole from Earth discovered yet. “We were totally surprised when we realised that this is the first stellar system with a black hole that can be seen with the unaided eye,” said Petr Hadrava, co-author of the research and Emeritus Scientist at the Academy of Sciences of the Czech Republic.

The black hole obviously isn’t visible to the naked eye, only the stars are, but if you want to look anyway it’s located in the Telescopium constellation in the southern hemisphere. It’ll be best viewed during a clear night, and two fuzzy bright pinpricks should be discernible without binoculars or a telescope.

“One could also have a very close look, if there’s really no X-ray from accretion. A little bit should be there, but it would require a fair length of observing time to detect it. This is a completely new regime of low accretion rate, and that might work differently than the high accretion rates we know of,” he concluded

Although the object seems to have been near us all along, it has escaped detection until now. Not only is the black hole pretty small, it’s also very quiet – meaning it doesn’t spew jets of electromagnetic radiation, unlike the supermassive ones at the centres of galaxies guzzling up stars. The team has only managed to infer its existence from the wobble of the stars that orbit it.

“There must be hundreds of millions of black holes out there, but we know about only very few. Knowing what to look for should put us in a better position to find them,” said Rivinius.

In fact, the team believes another system known as LB-1 might be a triple system too.

“LB-1 is a bit further away from Earth but still pretty close in astronomical terms, so that means that probably many more of these systems exist,” said Marianne Heida, co-author of the paper and a postdoctoral fellow at ESO.

“By finding and studying them we can learn a lot about the formation and evolution of those rare stars that begin their lives with more than about eight times the mass of the Sun and end them in a supernova explosion that leaves behind a black hole.”

Rivinius wants to get a closer look at the system to trace the orbits of the objects to get a better idea of their masses and to see whether the black hole really emits no electromagnetic energy at all.

“I’d like to take an image of the orbit. I hope we can do that with our interferometer, the VLTI. Scientifically, that would pin down the distance and masses much better,” he told The Reg. ®

Sponsored: Webcast: Build the next generation of your business in the public cloud